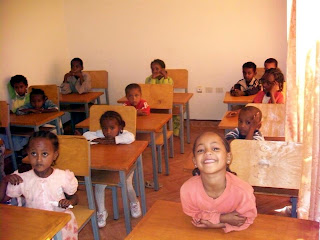 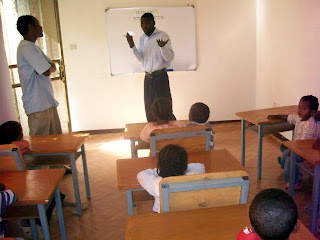 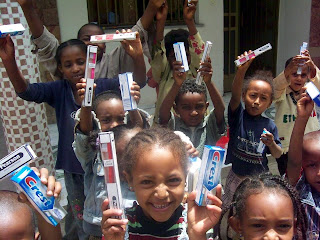 Children happy to have a toothbrush. 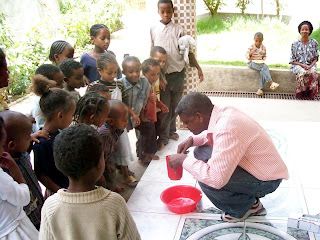 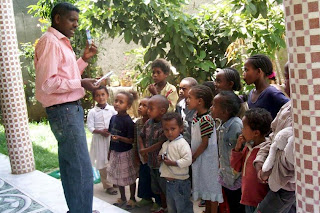 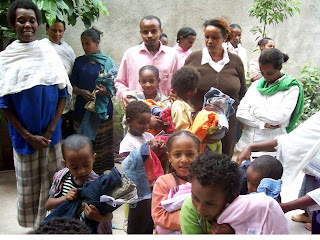 Children with parents and representatives from local government. 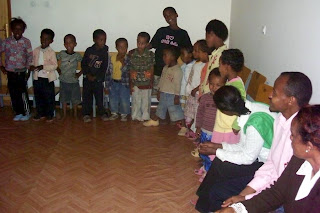 Children with representatives of the local government. 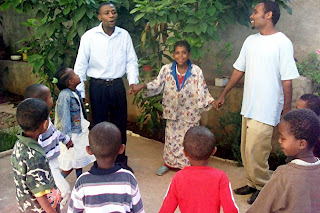 Peter provided this update on the teaching and celebration of the children and families at the Compassion Family International (CFI) drop-in center in Lafto, a neighborhood in Addis Ababa, Ethiopia:

We had wonderful time together at CFI with all the children, parents and some people from the government office and with some of the volunteers from the Ethiopia Guest Home. There were about more than 60 people having meals and drinks, distributing clothes and toothbrushes, and for the children to have a fun time.
The purpose of the meeting was just to have a get-together and to know each other. We also heard feedback from the parents about their children's progress since they come to CFI. People from the government who had selected the children to place with CFI expressed their appreciation for our work with the children and community. The also promised to stand behind me when ever I needed help. The promised us that the children will be able to be promoted to at least grade 1 and 2 starting from this coming September. It is very good for us.
One of the children's mother gave us a feedback about her 7-year old daughter, Mekides. She said that Mekides had never obeyed her and always created troubles at home, and because of this her mother not happy. But now she says Mekides' character and personality has been completely changed and their home is now full of peace. Now Mekides tells her mother that she loves the Lord and she loves singing every time at everywhere.
There is another boy named Abush, who moved here from the countryside and lives with his uncle. He is now 12 years old, but he didn’t get a chance to go school until this year. He is thankful for CFI since now he can write his name properly, and he is surrounded by many friends, and able to eat a meal every day.
Another child, Fasil, has had a difficult background. His mother is a kind of young lady and she always suffered to earn a daily income. She meet a man who became her boyfriend, and after a while she became pregnant and gave birth to Fasil. When her boyfriend heard that she gave birth he left her alone and she couldn’t find him. She start working in an undesirable job to make sure Fasil received proper nutrition, and she heard that CFI had opened our door for the poor. Fasil's mother brought him there. After Fasil was approved by the local city administration, he started attending school at CFI, and now Fasil is growing very much and he is happy every day. Fasil's mother is so thankful about the opportunity she had to help her child.
At our other drop-in center in Kechene, the children are growing very much mentally, physically and spiritually. We have made a lot of progress there. The kids working very hard on their school and they speak English very well. We always asking them about their future and every child has a dream that they are aspiring to.
For example, Yerderder is the top performer in Grade 1 last semester. Yerderder is a bright, motivated leader at Kechene. Her high grades are a reflection of her enthusiasm to learn, exemplified by her active participation and the numerous questions she asks during class. Yerderder wants to follow a career as a doctor when she grows up and enjoys math class.
Yerderder embodies the spirit of the student body of Kechene. With our help, Yerderder can receive a proper education and realize her dream of becoming a doctor.
God bless.
Peter
Posted by International Hope and Heritage at 6:15 AM 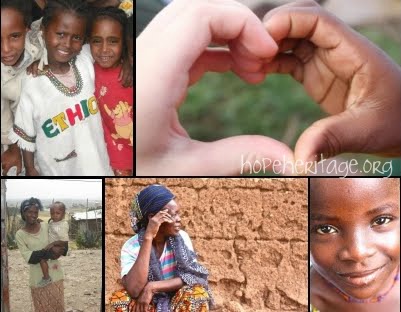 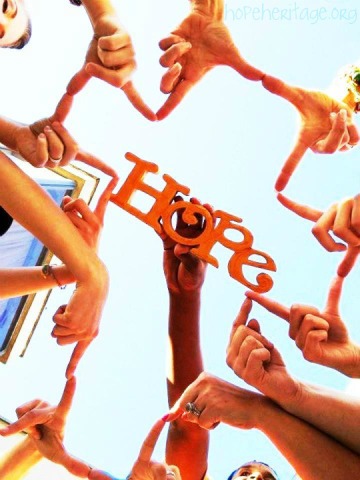